The 2013/14 season of the Australian National Basketball League (ANBL) kicks off on Thursday October 10 with three-time defending champions, SKYCITY New Zealand Breakers, taking on the Woollongong Hawks at Vector Arena in Auckland at 7.30pm.

And the team here at Saint Clair Family Estate, who are firm supporters of the only Kiwi team in the league, are fully backing the Breakers’ attempt to create ANBL history by winning four titles in a row.
Saint Clair Family Estate’s multiple award winning wines are available at the SKYCITY Sports bar and our Vicar’s Choice Sauvignon Blanc, Chardonnay and Pinot Noir feature on the corporate tables at all the Breakers’ games held at the North Shore Events Centre. 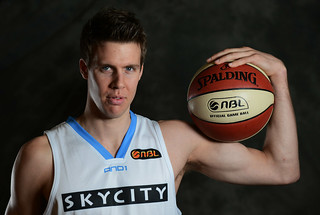 Breakers swingman Tom Abercrombie, who is returning for his sixth season with the club, kindly took some time out of his busy schedule leading up to the opening game to tell us a bit about himself.

The 26-year-old is one of four team members to have played in all three Championship winning teams for the Breakers – his top achievement to date, he says.

Keep an eye out for Tom when he takes to the court in his No 10 singlet on Thursday night – he’s a huge asset to the team for his ability to defend multiple positions, and was awarded the Larry Sengstock Medal for being the 2011 Grand Final’s Most Valuable Player.

SC – Who is the greatest sporting legend – alive or dead?

SC – What is your greatest achievement to date?

SC – Who inspires you the most and why?

TA – My parents. They inspire me to do what I love every day and enjoy life to its fullest.

SC – Is ambition or talent more important to success?

TA – Definitely ambition, talent can only get you so far and then you figure out there are many others out there just as talented as you. Ambition is what separates you from the pack.

TA – Love playing Playstation or anything to do with the beach and the ocean.

SC – Greatest album of all time?

SC – One thing (not person) you couldn’t live without?

SC – Your no. 1 piece of advice to help people achieve their goals:

TA – Dream big but set a lot of small goals along the way to help you get there.